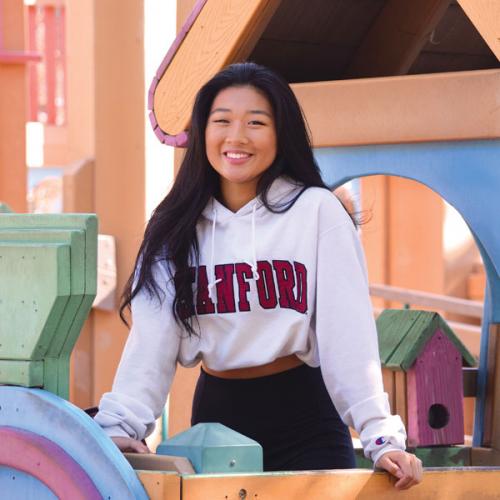 “After speaking with my mom and teachers, we came up with an idea based on those little libraries people have in their neighborhoods. It would be socially distanced, people could come and go as needed, and it would inevitably help the community, even though I couldn’t physically be there.”

The 18-year-old revamped the little library concept into a tiny food pantry that contained nonperishable food items for people to take as needed. Whether someone was looking for a recipe ingredient because the grocery stores were out of baking supplies, or a snack on their walk, Jun’s boxes catered to many needs.

Constructing the four boxes became a family project. Jun’s dad acquired the building materials and made measurements and cuts. Her brother nailed down the roofing. Her mom painted the box exteriors with the McClatchy logo in eye-catching colors. It was Jun’s job to figure out how to monitor the goods inside and make sure the boxes stayed stocked.
Jun used her engineer’s brain to devise a system of six slots inside each box fitted with motion sensors. When triggered, the sensors sent emails through a website to let Jun know a product was out of stock. She wired and programmed everything herself, using YouTube tutorials and advice from friends in robotics classes. She learned soldering, which she found difficult and time-consuming but also “an amazing new skill to learn.”

The four boxes were set up around the Sacramento area—usually in front of a friend’s house, to help keep an eye on them—and became a full-time operation. At first, Jun used her dad’s NextDoor account to send out a request for donations of nonperishable food items. When the boxes took off (helped by a feature on KCRA 3) and were emptying faster than she could resupply them, Jun changed tack and asked people to deliver goods right to the boxes or to her front door.

“For three weeks, every day felt like Christmas,” Jun says. “Every time we’d leave the house, there was always something new in front of the door. It was so heartwarming.”

Though Jun’s project only lasted until February, a retired McClatchy teacher who lives in Lincoln was inspired by the venture. She asked Jun for the specs to create boxes. Jun passed along the boxes she previously built. Now the project has a new life in Lincoln.

“I wasn’t just fulfilling a requirement for a project. I saw it as connecting with people in my community,” says Jun, who wants to study the human applications of technology.

“I loved when I’d go to fill the boxes and see people actually using it. People would randomly shout ‘Good job!’ out the car window. That’s not necessary or something you think of, but it really sticks with you. I’m just glad I was able to help out.”

This item appears in

Back
This item appears in: